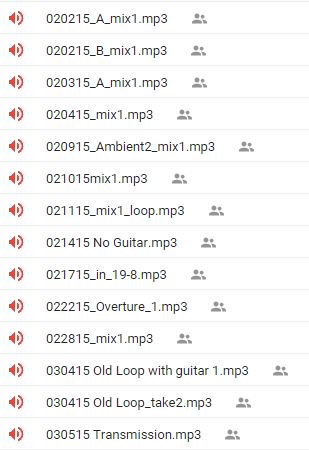 The attached .jpg represents almost everything I’ve uploaded for my beta listeners since I started this recording project in late-January; there’s still a few more sketches on my hard drive that I haven’t uploaded yet, mostly because there’s not much to them.

I’m working on a bunch of things at once; I’m writing brand-new stuff, and also revisiting some much older stuff that’s never been properly recorded, and I’m also now starting to examine everything as a whole, and am beginning the process of separating the keepers from the b-sides.  And at some point I need to start working on lyrics.

All things considered, this is as productive and prolific as I’ve been in years.  For the longest time – like, the last 20 years – I was too complacent and lazy to ever get my ass in gear.  I’ve always wanted to record an album, but couldn’t be bothered to actually write anything, or let myself get into a songwriting routine – I was focused on other things, or just simply too unmotivated to get off the couch.  Hell, I have a hard time even calling “Untrue Songs” a real solo album – it was recorded over the course of 8 years and I wasn’t ever sure if any of it was going to see the light of day at all, and basically I put it out because I wanted my newborn son to know what all the instruments in the office sounded like.

For whatever reason, though, this time is different.  This time I’m genuinely excited to get home and start working.  Even on nights where I say to myself, “you know what, it’s been a long day, let’s take it easy tonight and switch off”, I still end up going into the studio and start tinkering with something.

So even if I technically failed the RPM Challenge, the overall experience has been nothing short of a fantastic success; I’m making music again, and I’m as happy about it as I’ve ever been.  I don’t necessarily have a timeline for finishing this thing, but believe me when I say that I’m as excited to get this new stuff out into the world as anything else I’ve worked on, possibly ever.

GAMES:  Because I’ve been so music-focused lately, games have obviously taken a bit of a back seat.  Obviously, given the current release calendar, I haven’t necessarily been missing all that much.  I treated myself to a bunch of well-regarded indie games last week but haven’t really given myself any time to play them:

I did end up renting The Order 1886, though it hasn’t arrived yet; I also rented the DmC HD remake, if only because I really like that game and would like to see how it could look even better than it did on my aging PC.

Side note – I am still kinda curious about those upcoming Steam Machines, and if I can get one with great specs for a relatively reasonable price, I very well might buy one and have it replace my PC.

BOOKS:  I finished Charlie Huston’s Skinner this morning.  I liked it, I think?  I don’t know.  It moves quickly, and some of the action set pieces are pretty exciting, but for an action-spy-techno thriller I never felt any danger, and the main characters are impossible to relate to (given their very plot-necessary personality quirks).  Now I’m finally reading David Mitchell’s The Thousand Autumns of Jacob de Zoet, which I’ve been meaning to get to (and yet was very intimidated by, for reason I can’t explain).