In today’s edition of Three Things, I’m going to get the easy stuff out of the way first.

GAMES:  Finished the GTA V campaign (again).  Now I remember the finale’s “choice” that I mentioned I’d forgotten in last week’s entry; in the heat of the moment I chickened out and did what I did on the 360 (the “suicide mission”) for two very specific reasons:  (1) I don’t want to have to play this goddamned game again, and (2) I recall hearing that in these re-releases, there was going to be an L.A. Noire-ish mission for Michael to do, and I wanted to keep my options available if that was indeed the case.  Haven’t yet encountered it, and it may not in fact be in place just yet.  After that, I decided to give Shadow of Mordor another try, but it needed an 8GB download first, and I wasn’t about to wait that long.

BOOKS:  Finished J.M. Ledgard’s “Submergence”, which is admittedly very beautifully written, but I don’t understand why it exists.  Its two main characters meet in a hotel and fall in love and then go in wildly different directions, never meeting again, and it’s totally unclear to me what their parallel stories had to do with each other – especially since the book is not told in chronological order, meaning that their affair is interspersed with current action throughout, and there’s no discernible rhyme or reason that I can make out.  It’s a quick read, so it has that going for it.  I’m now reading Charlie Huston’s “Skinner”, which I’m enjoying even though it’s unnecessarily difficult to figure out who is talking in any given scene, given that every character talks in short bursts, and nobody is properly identified, and because this is a spy novel, it’s impossible to know who knows what – which is to say, in a conversation that’s almost entirely devoid of verbs, either person could be speaking at any given time.  It’s deliberately disorienting and it’s almost annoying.

MUSIC:  It’s March 1, which means the RPM Challenge is over.  Did I complete the Challenge’s objectives?  No, though of the 15+ things I recorded, I did bounce 11 of them to mp3, and I’m quite happy with 4 of them.  I’ve also figured out how to trick my Mac into recording guitars and MIDI stuff at the same time, which means I now have a much bigger arsenal to work with.  I always kinda knew in the back of my head that this project wouldn’t really kick into the next gear until I could figure that part out, and now that I’ve figured it out, I can continue writing brand-new stuff while also expanding some of this new material into fully-fledged songs.  This is exciting.

Even if I’m no longer carrying this burden of melancholic nostalgia around with me, I’m still working with it as a source of inspiration, and as such I’m still going through my old notebooks, looking for who knows what.

This brings us to this entry’s title, because poor archiving – in any medium – is a big deal.

I’ve always been a lousy lyric writer.  In my high school band, I wrote tons of lyrics, but I never paid attention to how good they were; it just mattered that I had something to sing.  In the bands I was in during college, though, I suddenly became very aware of how terrible they were, being that I was surrounded by English majors, one of whom was not at all shy in letting me know that my stuff wasn’t very good.  Eventually I got to the point where I simply made them up during shows; I knew that nobody was able to hear the singing anyway during a performance because, at least in my experience, nobody wants to turn their amps down on stage.  (I also had a terrible time memorizing my own lyrics – which is odd, considering that I never had trouble memorizing lines for plays; it also should be noted that the band I was in at that particular time was more interested in jamming than in songwriting, and we were especially interested in playing at very loud volumes, and in any event none of us were clear-headed enough to notice whether or not I was singing actual English words.)

Point being:  the other day I started thinking about one of these new songs, and a random lyric couplet suddenly popped into my head.  As I said, my lyrics are mostly forgettable, but every now and then I come up with something that’s not terrible, and so in this case I immediately started wondering if there was more at the source.  I started going through my old notebooks and diaries and discovered that even though I referred to it (“Farewell”) on numerous occasions as one of that band’s better songs, I never actually wrote a chart for it, or a formal set of lyrics.  I found the relevant couplet, but the only other relevant bits were these sketches, neither of which ring any bells. 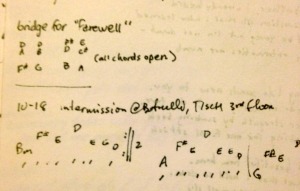 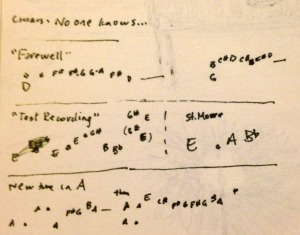 My only other option was to go through my gigantic box of rehearsal cassettes and hope that I had a recording of it somewhere.  Sadly, I don’t.  This song – however great it might’ve been – is gone, forever.

Going through my old cassette tapes, I did find another gem; one of this band’s last gigs was a very strange 3-hour show at a dimly-lit East Village dive, and someone recorded it for us; and within that gigantic mess of noise was, as I recall it, a pretty amazing cover of “Starla” by Smashing Pumpkins.  I found that tape, and found that jam, and was able to convert it to mp3.  Sadly, my memory of it is much different from what it actually turned out to be, even if I found myself able to air-guitar along to it perfectly after not hearing it for almost 15 years; in its 10+ minutes, there’s a very beautiful quiet section that maybe isn’t quite as orgasmically incredible as I remember, but there’s also a whole bunch of nonsense at the end (most of which I am largely responsible for – at the climactic chord change, I stomped on my distortion pedal and walloped a D chord that inadvertently broke at least 2 guitar strings, resulting in a ridiculous cacophony, and instead of dealing with it I ended up going with it, playing louder, which – hearing it now – was perhaps not the greatest idea).

Not everything from that era needs to be saved, of course, but the sad truth is that those tapes are all I’ve got left of that era; while the bands I was in from 1995-2000 taped nearly every rehearsal, we only ever made perhaps 3 or 4 formal recordings, and we never took the time to convert those cassette tapes into something more permanent.  I can’t speak for the other guys, but I always assumed I’d have a cassette player handy if I ever wanted to hear that stuff again; it’s alarming how quickly tapes died out once iPods appeared on the scene.

Even more frightening is that everything else I recorded on my own between 2000 and 2014 only exists in my Macbook’s iTunes.  Between dead technologies and crashing hard drives (and my stepbrother accidentally taping over a solo show that contained the only decent recording of maybe the best songs I ever wrote), I’ve lost all of the original files, and if my Mac dies, that’s it.  It might not matter to anybody else, but it matters to me, and for all my obsessive documentation I never actually backed up the stuff that matters.   (This is why, when I finally release this album, I’ll most likely put the demos and sketches up too, just so that they’ll exist.)

One thought on “Keeping The Past Alive”