I am, I think, finally on the back half of the 2019 edition of our annual WINTER COLD THAT WOULD NOT DIE, which has laid up my entire family for basically the last month. I caught it first, then my son had it – it turned into the flu for him – then my wife got it – which turned into both the flu and strep throat – and then I’ve just had a weird frog in my throat for the last week, which was probably brought on by talking too loudly at an already loud social gathering.

One thing about being cooped up and helpless for so long – it tends to get my depression out and about. Everyone’s depression comes in different forms; mine takes the shape of me isolating myself, turning inwards, shunning social media, and kinda just swimming through a haze of lethargy and exhaustion. This tends to make being an active parent even more difficult. I want to be present in my son’s life, I want to participate in activities with him and keep him interested in what’s going on, and this is VERY HARD TO DO when all I feel capable of is hiding under a pile of blankets in the fetal position. It’s also not a great look to be hiding out in the basement playing video games, especially since he’ll want to come down and play also, and I’ll want to let him, and then I have to watch him be terrible at them.

Anyway. I’m saying this out loud [he typed, bloggingly] because I’ve found that saying things out loud tends to diminish their power. I had a therapy session over the weekend and I talked myself hoarse without meaning to, and a lot of what was discussed was precisely this – that acknowledging depression and anxiety and the act of just saying it out loud gives me an element of control over those feelings; they don’t magically disappear, but they do start to take some sort of shape that I can recognize and then deal with.

I’ve been ready to start finishing up / re-starting this album for a while now, but of course I have trouble getting started because a body at rest tends to stay at rest, and there’s always the inevitable rust that you have to shake off before you can actually start making good stuff. That being said, last night I started to feel like I could actually sit down at my music station and start tooling around and that it wouldn’t sound like shit, and that’s a feeling that is vitally important that I hold on to, because otherwise nothing will continue to happen. I’ve been in a state of heightened listening lately, which usually means that I’m very close to having ideas again. That is a regrettably unusual feeling for me these days, and I gotta keep holding on to it while I still can.

The one good thing about writing here so infrequently is that when I do bother to show up, I actually have some shit to talk about. I’ve been reading like a man on fire lately, and since my last post I’ve added another eight (8) books to my “finished” pile.

I have not yet finished Marlon James’ Black Leopard, Red Wolf; the writing is so stylized that it’s somewhat difficult to tell who’s talking and what’s happening. I don’t want to give up on it, but I also don’t want to drive myself crazy, either.

As this blog is still ostensibly about gaming, I might as well talk about what I’ve been playing of late. Up until Friday, the real answer was “not all that much”; I’d been tooling around replaying stuff I’d already finished last year. But then Friday happened and I went a little nuts and got Crackdown 3, Far Cry New Dawn, and Anthem. I’m saving Anthem for its proper launch date – I gave it a quick spin, saw that it was working better than it was in the beta, and decided to let the big launch-day patch happen before sinking any real time into it.

As for the other two – well, look. I don’t know what to say about Crackdown 3. It is not the debacle that Crackdown 2 was, but it’s also not the must-have console exclusive that I’d been hoping for. It is, instead, for better or worse, basically the exact same experience as Crackdown 1, but with better graphics. It is still janky in the same ways as the original; it might even have some of the same sound effects. But chasing orbs is something that never, ever, ever, ever, EVER gets old, and since I’m a Game Pass member and thus didn’t actually pay for it, I’m certainly getting my money’s worth. In these troubled times, sometimes you just want to turn off your brain and jump really high and throw cars at bad guys, and to that end I can’t really complain.

As for FC:ND – well, I got pretty far into Far Cry 5 but I didn’t actually finish it, so I only know what happened through YouTube. Given that New Dawn very explicitly spoils the ending of FC5, I am not feeling all that inclined to finish it now. But I’m enjoying New Dawn to the extent that it’s a silly Far Cry game, and that it’s absolutely gorgeous, and that the designers have done some cool things to FC5’s existing map; I am traipsing around in places that I recognize, but only vaguely. And I can’t emphasize enough how goddamned beautiful it is. 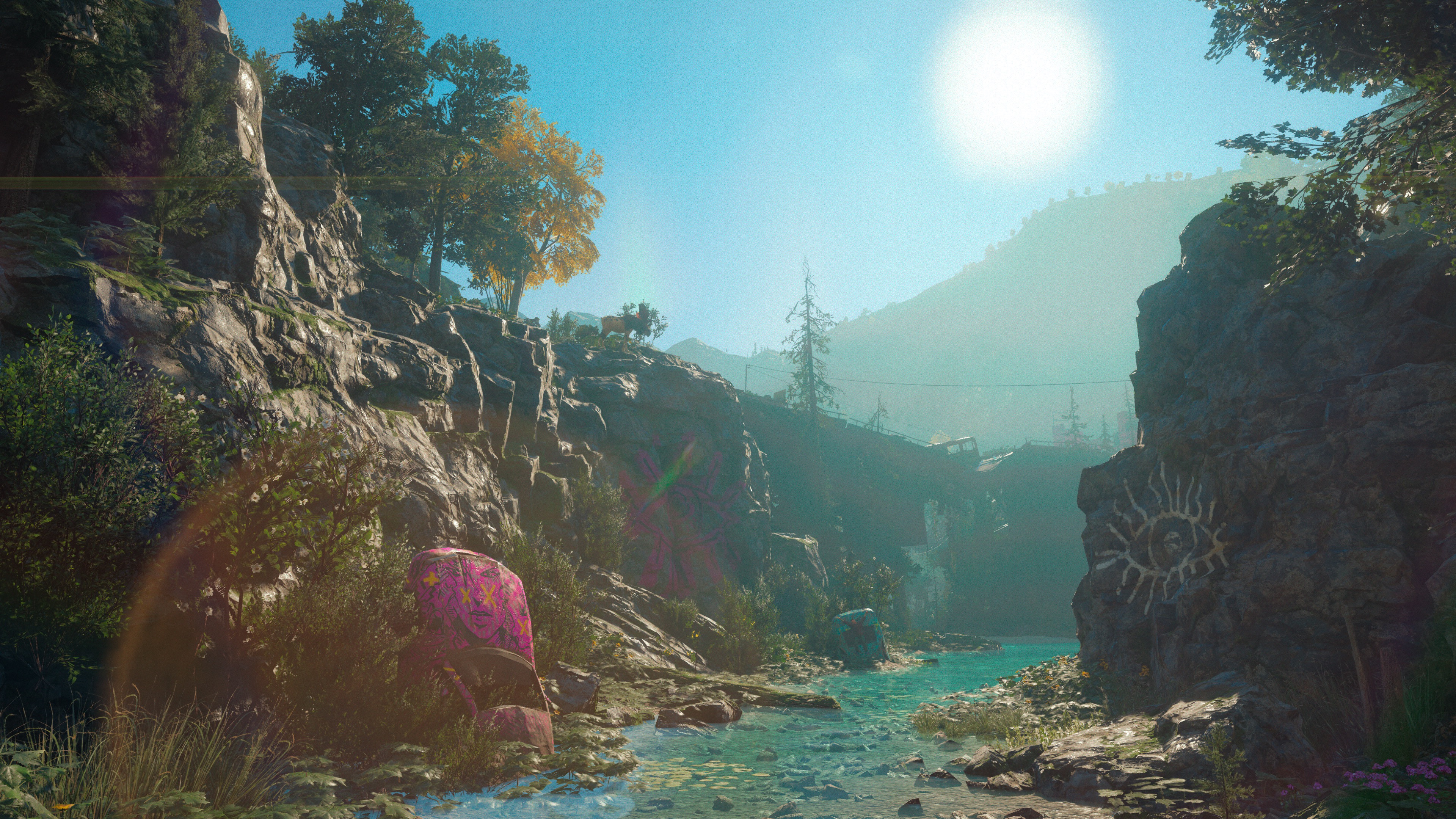 2 thoughts on “How To Reappear after Disappearing Completely”