The wife and I have been talking about buying a record player for a while now, and I’m pretty close to pulling the trigger – especially since my mother-in-law just gave us a whole bunch of her old albums.  But I haven’t yet bought one, and there’s a couple reasons for that.

One:  we don’t listen to music very often in the house.  Now, part of me feels like I’ve failed as a parent because I, as a musician, haven’t exposed my son to enough music.  But the truth is that my wife and I like somewhat different things, and while the Venn diagram of our respective tastes does have some overlap, my son’s interests lie completely off the map.  Yes, he’ll listen to the Beatles in the car, but he’ll also want to listen to the “Sing!” cover version of “Shake It Off” a thousand times in a row.  And when we’re home and hanging out, he’s very insistent that we listen to no music at all, because it affects his ability to stack dominos. 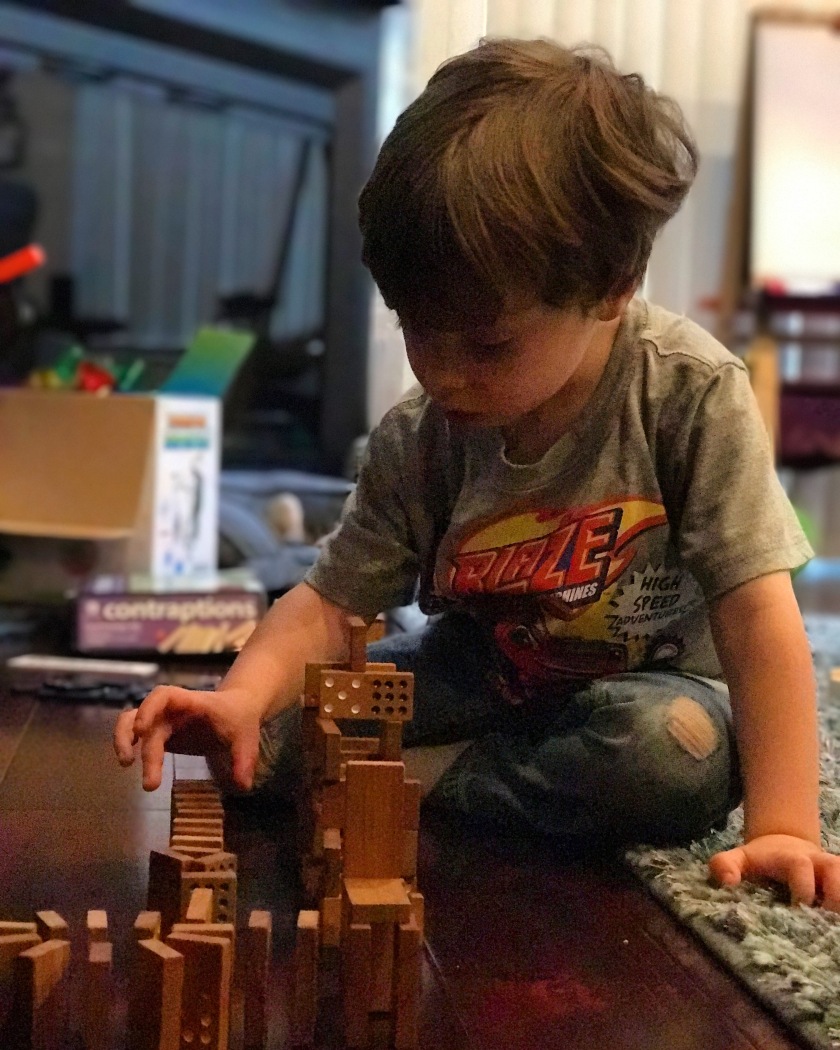 The other reason is that… well… it’s a very slippery slope for me as far as record-buying goes.  Because if I buy one, I’ll buy a hundred without even blinking.  I’ve even been going through my existing collection wondering what might sound better on vinyl.  I mean, yes of course I want to get the new Sgt. Pepper remaster on vinyl, and the OK Computer remaster, and then I’m sure the new Fleet Foxes album sounds amazing, and then the next thing you know I’m $10,000 in debt and my floors are sinking because my vinyl collection is too physically heavy.

So I’ve gotta be careful, is what I’m trying to say.

I think I’d mentioned not too long ago that I’d been diving into some of my gaming backlog, and I realized that I’d made two notable omissions.  One is a replay of Wolfenstein: The New Order, because killing Nazis is particularly life-affirming in this current political climate, and the other is a revisit of Watch Dogs 2.

I don’t think I wrote about Watch Dogs 2 when I first started playing it last year; and if I did, I can’t seem to find it.  I can’t recall why I stopped playing it, either, beyond probably just being overwhelmed by my backlog in general.  (It’s entirely possible that I bought it in the middle of a gigantic Xbox sale, and so I was playing a dozen different things at once, and one of them ultimately won out.)

In any event, it’s a weird game in all the ways that Ubisoft open-world games are weird, but it’s also strangely compelling in all the ways that the first Watch Dogs wasn’t.  This doesn’t necessarily forgive it for its narrative sins, nor does it absolve it for its bizarre sense of morality, nor does it get a pass for making me feel like a very, very old man.  But I’m continuing to play it, which means there’s something there that’s keeping me invested.

WD2 is ridiculous and wildly incongruous in terms of its tone, but I think it’s at least supposed to feel that way.  It’s silly and goofy and while it still has moments where it’s attempting to be earnest – i.e., that you’re part of a rag-tag group of hackers with a Robin Hood ethos – you at least don’t feel weird when your quiet attempts at hacking go awry and you end up having to shoot everyone in the face with machine guns that you build with a 3D printer in your hacker base.  And even though you’re hacking for the greater good, you’re just supposed to ignore the fact that you not only steal cars all the time, but you steal all the expensive stuff that’s left in the cars, and you’re also constantly stealing people’s money out of their digital accounts – you can’t help yourself, because the game conveniently highlights them in blue and makes it very obvious that they’re ripe for the picking.

The game’s biggest sin, of course, is that it makes me feel like a very old man who wants to yell at kids to get off his lawn.  I don’t know if this is because Ubisoft has accurately portrayed youth/hacker culture, or if a similar group of old men think they accurately portrayed youth/hacker culture, but the point remains the same – Marcus and the rest of the DedSec crew are annoying and ridiculous and I kinda want to punch them all in the face.  The game’s got a pseudo-version of Instagram in it and if you take selfies in certain spots you get rewarded with more selfie gestures (which sounds ridiculous when you type it out like this), and your friends make the DUMBEST FUCKING COMMENTS underneath each photo, and the whole thing is just so absurd.

And yet I must confess that in spite of this game’s desperate desire to be cool and hip and relevant to whatever millennial audience they’re hoping to attract, and thus it has alienated me utterly and completely, I apparently also don’t seem to care all that much because I’ve been playing it for most of the last two weeks; and so while I’ve stopped paying attention to the narrative, I have at least continued to remain interested in the tasks I’m asked to perform.  They are repetitive, as all these things tend to be, but at least they’re different.  As in the first game, it can be immensely satisfying to come across a group of bad guys and find a way to take them all out without even setting foot in their space.

Frankly, it can be just as satisfying to just cruise around and see what’s going on – the digital San Francisco in this game is quite fascinating to explore.  Indeed, one of the things I most appreciate is that unlike other Ubisoft open-world games I could name, the map isn’t that cluttered with ridiculous things, and the hidden things that you do come across are actually quite useful.  Those Instagram selfies I mentioned earlier?  They help you level up and earn followers – followers are basically XP, and the more XP you get the more Research Points you can earn, and those Research Points help you unlock perks and powerups and such.  And so if I need a break from the story (such as it is), I’ll just go hunting for Research Points.

I’m a little surprised that Ubisoft didn’t mention the Watch Dogs IP during their E3 press conference – or maybe they did, but nobody remembered – and perhaps it’s just as well, given that it’s hard to know what this game is meant to accomplish beyond being a more tech-savvy and less blatantly misogynistic Grand Theft Auto clone.  That being said, WD2 is certainly engaging enough to check out – and given that it’s been on a sale a lot lately, you may want to give it a look.

One thought on “Revisiting Watch Dogs 2”