I’m fighting a horrific head cold, so bear with me as I try to remember what’s happened this week:

1.  The biggest news is that I’ve got some serious Vita problems.

In my previous post (Monday), I’d said (at the very end) that the memory card for my new Vita had finally arrived, but the Vita itself wouldn’t work on my office wi-fi, and so it was still useless.  So I finally got it set up Monday night, and then promptly downloaded all the stuff that I’d already had in my PSN library – Fez and Steamworld Dig, for starters, and then using my $10 credit to help pay for Final Fantasy X HD.  PS+ people also get Uncharted and Wipeout for free, so I started downloading those as well…

…and they literally didn’t finish downloading until Wednesday morning, before I left for work.  That should’ve been my first clue that something was off.

My second clue was that there was this weird vertical line running down the left-hand side of the screen – very faint, but sort-of looking like the red line on loose-leaf paper.  Which eventually faded away.

My third clue wasn’t even a clue.  Wednesday afternoon, during a slow moment at work, I pulled out my Vita and decided to give Uncharted a try.  I got around 30 seconds into it when the graphics started glitching out, and then the game suddenly froze up.  I powered the Vita down, waited a little bit, and then tried to restart – but the Vita wouldn’t restart.  Screen stayed black, no sound, and then the machine would turn off.  Contacted support – tried doing a forced restart into safe mode three times – still nothing.  So now I’m sending it off for repairs.  I am doubtful that I will get it back before my upcoming vacation, which is a little over 2 weeks from now.

On the bright side, Fez is still wonderful, and I’m really glad to have it in a portable version.

2.  I finished one playthrough of Metal Gear Solid: Ground Zeroes.  I am unsure if I will play through it again, although the release calendar is still a bit dry for the foreseeable future, and there’s certainly a hell of a lot more to do.

My feelings about the MGS franchise are well-known and not worth repeating here.  As for this particular game, well:  Ground Zeroes has some of the best moment-to-moment gameplay the series has ever seen, and it uses the open world remarkably well (even if that world is small – and probably it’s done well because it’s small), and I’ll admit that there’s a part of me that kinda does want to play through it again and see all the stuff I didn’t see the first time.  And maybe I’d also do all the side missions and all the other stuff that’s there, because based on my post-game stats it’s abundantly clear that I’ve barely scratched the surface.  (And so the common pre-release complaint about having to spend $40 for 1 hour’s worth of gameplay is clearly ludicrous, because there’s obviously a lot more here to do.)

But the game is also fucking ridiculous, and impossible to take seriously, and features some of the worst dialogue I’ve ever heard.  I don’t know why people are so up in arms over Kiefer Sutherland’s casting; he barely utters a word, and in any event the words he does utter might as well be gibberish.  I don’t know if it’s the translation that’s so terrible, or if it’s that the translation is slavishly faithful to what’s actually terrible in the original Japanese*, but ultimately the problem is simply that it’s dumb.

There’s a lot of discussion (that I’m too lazy/sick to link to) about how it’s often unfair to credit one person as the “Game Maker” when a big-budget AAA game is often the work of hundreds of people – but MGS has always been Hideo Kojima’s baby, and the number of times his name appears in the opening titles and closing credits** means that he’s OK with all this.  Even though he’s said numerous times that he’s tired of Metal Gear and longs to do something else, he’s continually given enormous resources to keep cranking these things out, and so he continues to stick with it.  And there’s a part of me that admires his willingness to out-crazy himself with each successive effort.  But this isn’t Saints Row, which at least has the benefit of being clever.

I am beginning to feel that Kojima is turning into George Lucas, surrounded by an army of minions who are terrified of saying “No, don’t do that.”

3.  I am becoming weary of Infamous: Second Son, even as it continues to graphically dazzle.  The Infamous games have always been fun but also somewhat shallow, and that is definitely the case here.

4.  I am hoping to finish Bioshock Infinite: Burial At Sea Ep. 2 by the weekend.  I continue to enjoy it in spots, and also deeply hate it in spots.  It is guilty of very lame and tired design cliches, such as the continued over-use of audio logs and the very, very tiring trope of wandering through a series of enemy-free rooms, finding the thing you’re looking for, and then – abracadbra, those enemy-free rooms are suddenly conveniently swarming with bad guys.  It is also still consistent with the original game, in that these beautiful paradises are completely devoid of normal human beings.  With a few notable exceptions, everyone you meet in the game (in person, at least) is an enemy.  It makes these fantastical worlds feel hollow.

5.  Anyone in NYC who has even the slightest interest in pinball should stop what they’re doing and head over to Modern Pinball NYC, over on 3rd Avenue between 26th and 27th streets.  I was there last night for the prelude to a NYVCC meeting, and it was love at first sight.  I’m a huge pinball fan but I’m also a homebody, and so most of my pinball time these days is spent either in Pinball FX2 on the 360 or in Pinball Arcade and Zen Pinball on my iPad.  And while those digital editions are fun in their own right, nothing beats the real thing.  Great selection of tables, both old and new, and they’re constantly being maintained – which is a treat in and of itself, getting to see the belly of a pinball table, which is insane.  Highly recommended.  I may end up throwing my birthday party there later this year. 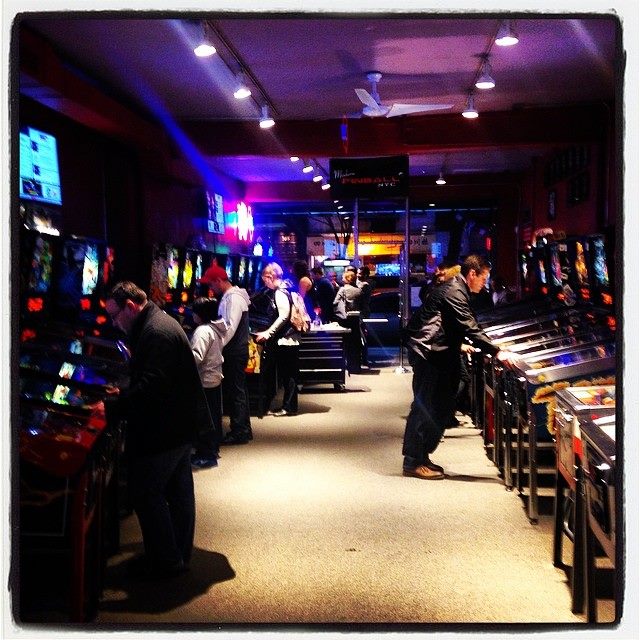 * This is the same problem I had with Murakami’s “1Q84”.  I’ve loved all of the English versions of his previous work, but I found the writing in 1Q84 to be pedestrian and sophomoric and completely devoid of his usual poetic voice.

** SPOILER ALERT – I am also aware that in one of the bonus side missions, Kojima himself is an actual character in the game.  So, yeah.

2 thoughts on “ups and downs”