I am old and jaded.  So when I say that Horizon: Zero Dawn has left me slackjawed in awe, and exhilarated after taking down a gigantic robotic dinosaur, I’m not being hyperbolic.  I am legitimately impressed that I can feel transported by any game, let alone a brand-new IP from a developer whose previous efforts were never really my bag.

In my last post, my gut reactions and first impressions led me to compare HZD to Far Cry Primal and Uncharted.  Those comparisons still feel appropriate, but now that I’m a bit deeper into the game (though I should also note that I’m doing as much side stuff as possible, so I’m probably not as deep into the actual story as I could be), I’d extend that comparison to include Witcher 3 and maybe even a little Dragon Age Inquisition / Mass Effect.

It’s not nearly as deep as those games, of course; the characters aren’t nearly as interesting, and the cities and towns you visit aren’t necessarily all that interesting beyond a first glance at their detailed architecture.  But they are structured similarly, at least in terms of the player’s relationship to the world, and certainly the amount of side stuff that you pick up along the main path creates a fair illusion of depth.

I don’t want to demean the accomplishments of HZD by reducing it to what it compares to, but it does serve as an effective shorthand in terms of letting you know just what it is you’re getting into here – post-apocalyptic third-person action RPG doesn’t quite do the trick.  And I’d also further note that all the games I’ve compared it to are games that I quite enjoy.

The game excels where it counts, is the important thing.  I am certainly very curious as to who our protagonist is and where she comes from, even if that’s more because of the narrative than because of her, specifically.  But more to the point, the game’s primary emphasis on hunting machines is excellent.  One would expect this from a developer known for its FPS franchise, but here the battles are as intense as anything I can remember.  After finally conquering a particularly grueling encounter yesterday, I literally stood up and shouted “YEAH!” I felt like I’d accomplished something.  These machines are motherfuckers, and even if I’m wildly overpowered compared to them I’m still wary, because one wrong move leads to instant death – especially if I’m not prepared.  And it’s very easy to not be prepared, which is why the gathering of materials is so incredibly crucial.  In nearly every modern game I can think of, I tend to go nuts when it comes to gathering materials and flowers and such, but I can’t think of many games where it’s absolutely vital in order to survive.  If I can’t craft a health potion, I’m fucked.

The 41-year-old father in me does wish that the game were a bit shorter, though I don’t mean to imply that the game feels padded.  It’s more that I just don’t have as much time as I’d like to be able to sink into this game; I only hope I can finish it before Mass Effect arrives in a few weeks.

Speaking of which:  I am not getting a Nintendo Switch, and thus I will not be playing Zelda: Breath of the Wild.  I can live with that.  As noted above, Mass Effect Andromeda is dropping shortly, and in the meantime I’m enjoying HZD far more than I ever expected to.  I almost feel bad for the developers; I worry that the game is getting swallowed up by Zelda’s massive presence.  To that end, I say – if you’re like me and didn’t get a Switch at launch, Horizon will more than suffice. 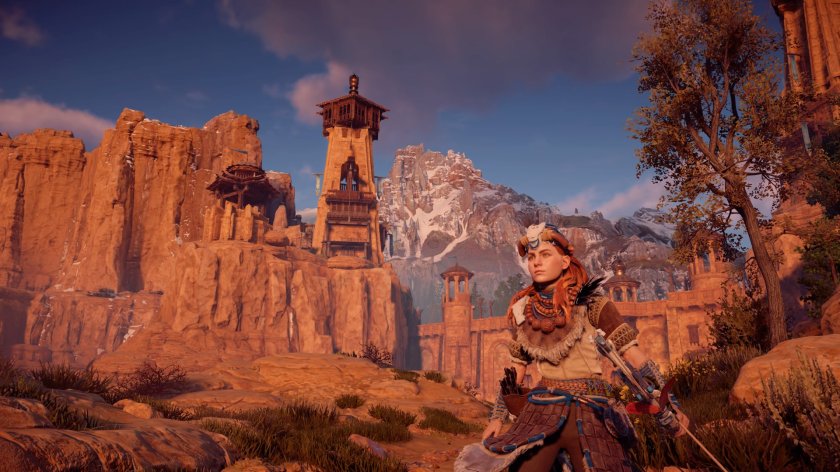