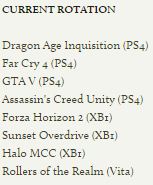 You may or may not have noticed that I keep a widget of what I’m currently playing.  I do my best to keep it accurate and timely, though sometimes I miss a few things here and there.  In any event, I’m marking this specific moment in time here because, if for some strange reason you’re reading this particular post in future weeks/months, it won’t look like that.  The current rotation widget may not look like that ever again.  Such a thing is simply unsustainable, because (i) unless I’m suddenly unemployed and (ii) I am also no longer required to be a parent, there can be no time to play all these games, and (iii) if everything in (i) and (ii) is (god forbid) true, then there’s certainly no money to purchase them.

More than that:  having this sort of to-do list is incredibly intimidating, and we’re not even taking into account my Steam backlog.   I’ve spoken before of the weird need to be part of the conversation, or to at least to have an understanding of what the current conversation is about, and this pathological need to be “up” on as many possible games as my brain can allow is basically a recipe for disappointment.  In my mad rush to dip my toes into all of these games, I’m resistant to letting myself get sucked into any particular one, and so I’m not having nearly as much fun with the fall blockbuster releases as I’d like.

I used to be this way with music.  I’d go to the record store and buy 5-10 CDs all at once (I realize that there might be some of you who are totally unfamiliar with this experience, and for that I pity you – to be fair, I also did this same sort of binging on iTunes and Amazon MP3) and listen to them all, only eventually sticking with the one that I liked the most.   It took two things to get me to stop acting this way:  the first was the realization that taste-making sites like Pitchfork, which I’d been relying upon since a few months after it launched, were no longer in sync with my own personal tastes (this 6.6 for the self-titled Forms album, for example – one of my favorite albums of all time – was the final straw), and the second was Spotify, which I was more than happy to spend $10/month on, considering how much listening I was doing (and continue to do).  (And yes, I do wish Spotify would modify their method of distributing revenue to artists – this Medium article has a much fairer and better approach.)  I still devour new albums and catch up on older ones I’ve missed, but I’m no longer putting self-applied pressure to absorb them into my bloodstream as quickly as possible.

I do still binge on books, but I can only read one thing at a time.  I have a good friend who’s constantly reading 2-3 books at once (while also writing her own novel and poetry), and I have no idea how her brain doesn’t explode.  As far as books go, though, the idea of a book backlog is comforting as opposed to intimidating; I generally read rather quickly, so I know I can get to stuff, but I also like knowing that I have a new book for nearly any mood that might strike.

Games, though… there’s this pressure to play them all, as soon as possible, and the pressure comes from all different angles.  If you’re into multiplayer, you more or less have to start from Day One – I just bought an Xbox One but I can’t possibly imagine jumping into Titanfall right now, since none of my friends are still playing it and I’d have to guess that only the hardest of hard-core fans are still around, which also implies that there’s absolutely no possibility for survival for a noob.  On the flip side, if you’re into single-player, you have to start early, too, so that you’re not accidentally spoiler’d.

There’s also the long-term pressure of simply staying current with the hardware you’re using.  If I’d never gotten around to playing, say, Red Dead Redemption, I’d be totally screwed now – my PS3 is in our bedroom, and my 360 is basically dead.  Sure, the PC is a bit better in terms of legacy titles, but by the same token – why would I want to start Baldur’s Gate 2 right now when I could instead start Divinity: Original Sin, which is itself already a few months old by this point?  And why would I play either of those when I have Dragon Age Inquisition on my PS4 right this very minute?

At some point I know I’ll get over this pressure to be on top of everything, especially since I’m currently under no professional obligations to actually be on top of everything.  But in the meantime, it’s driving me insane.  I think I said this yesterday – wanting to play all these games at the same time means I can’t actually allow myself to get sucked in to any of them.  I was telling a friend this morning – playing the new GTA V right now is an exercise in absurdity, because I’m too used to the first-person controls of Far Cry 4 to be able to deal with the changes in GTA’s 1st person scheme (even if you can change them), and similarly I’ve got Assassin’s Creed Unity in my fingers, which makes moving in GTA’s 3rd person scheme tricky, too (I keep hitting R2 to run, and I end up punching people in the face).  And having all three of those games in my hands means that the aforementioned Dragon Age Inquisition – the one game I genuinely want to play more than any of these others – is basically impossible.

In that list above you’ll also notice I’m currently playing Rollers of the Realm.  It’s a pinball/RPG hybrid, and it’s on the Vita, and it’s everything you could ever want a pinball/RPG hybrid to be.  (Here, let Kotaku’s Leo Wichtowski tell you about it.)  I played it during this morning’s commute and was charmed immensely; the dialogue is unexpectedly sharp and well-written thus far, but the pinball itself is solid and fun, and will be my go-to commute game for the foreseeable future.

I don’t know if this is true for all Vita owners or if it’s just my own particular experience, but my Vita’s download speeds are so ridiculously slow that it defies logic and reason.  Rollers of the Realm is 350 MB.  I started downloading it at 8:00 pm last night.  It didn’t finish until 7:00 this morning.  That’s 11 hours to download 350 MB.  The only reason why a 350 MB download should take 11 hours is because the current year is 1997.

One thought on “Stuffed”