Last week marked the DVD and On-Demand release of a whole bunch of films that the wife and I wanted to see in theaters but missed, including Tinker Tailor Soldier Spy (which was pretty good), David Fincher’s The Girl With the Dragon Tattoo (which was OK), and The Adventures of Tintin.

I have no connection with the Tintin source material.  I recognized the cartoon character’s visage but never read the books, and my only interest in the film was that it looked amazing, and that it had a bunch of voice actors that I liked (Simon Pegg, Nick Frost) and that Edgar Wright had a hand in the script.  And, of course, Steven Spielberg and Peter Jackson considered this a passion project of sorts, and who am I to argue if two titans of film want to collaborate on something near and dear to their hearts?

The movie itself?  Kinda dumb, actually.  I mean, it looked incredible – it’s probably the best looking CGI film I’ve ever seen – but we had a lot of problems with it right off the bat.  Tintin looks like a teenager, but he lives alone and carries a loaded gun, even though he’s just a newspaper reporter.  (Indiana Jones never carried a gun!)  Tintin befriends a sea captain locked away in his cabin – this captain turns out to be, among other things, a serious alcoholic, and this is ostensibly played for laughs even though the depths of his cravings become somewhat ludicrous.  It’s also got the worst score that John Williams has ever written – I mean, it’s bad, to the point where it was literally distracting from the scenes it was meant to accompany.  (His scores have always been emotionally manipulative, but that’s usually the point.)  And the film doesn’t really end so much as kinda peter out, like a slowly deflating balloon.

It kinda felt like we were watching a videogame, to be honest.  And the more I picked up on that feeling, the more I realized just how similar Tintin was to Uncharted 3. 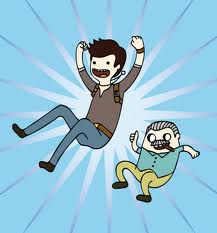 I could go on, but you get the idea.  I’m not suggesting that there was plagiarism at work; both the game and the movie were in development for years, and aside from Nathan Drake’s obvious inspirational debt to Indiana Jones, the two intellectual properties couldn’t be more different.  But the similarities were striking – not to mention the fact that despite the enormous technological prowess that went into making these two entertainments, they were both, ultimately, disappointing.